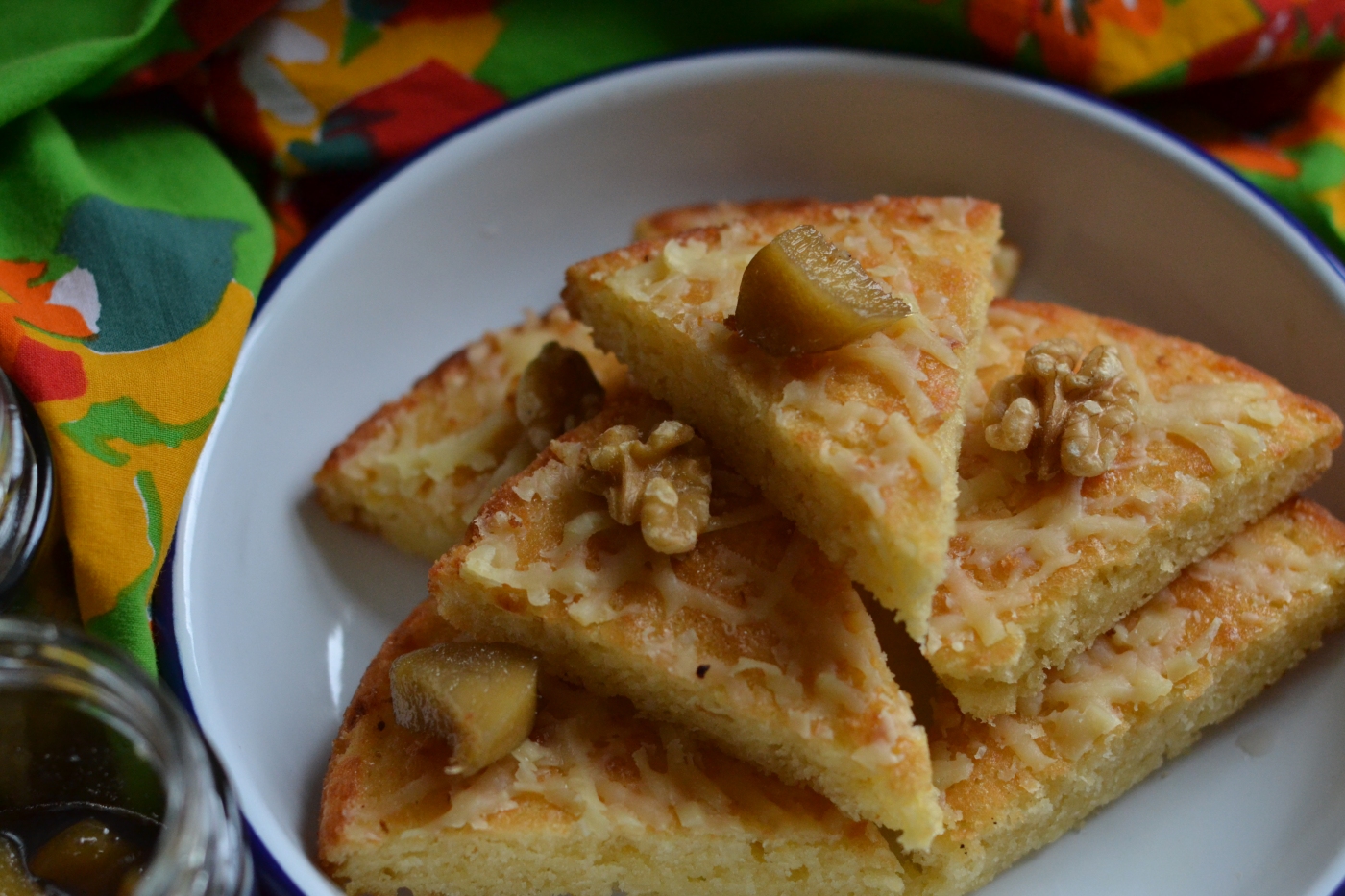 This little tome was published by the Cheese Information Service (catchily known as the CIS) which was formed in 1973 to just generically promote cheese (yes, really). The service is also responsible for a series of five pamphlets entitled Choose Cheese. There’s Nothing Like it, which I am yet to lay my hands on, but give me time.

The book itself looks exactly like I imagine the 1970s and is so perfectly earnest in tone. There’s the handy suggestion that you should try “cheese with pears or dried fruit or oranges. The sweet and savoury flavour is most unusual and exciting!” and the lengthy erratum slip inserted on p76 which makes quite significant corrections to the quantities for Almond Cheesecake. Best of all, however, is the ‘Cheese and Parties’ section which solemnly informs you that “Giving a party is fun, and Cheddar cheese can help solve the problem of what to serve…Whatever party you choose, you’ll find cheese fits all occasions”. Quite.

There are a few recipes I’m keen to try in here (Party Pyramids with prawns anyone?), but I plumped for this one because it was a slightly strange combination of sweet and savoury and also because I had all of the ingredients in my flat.

1. Preheat oven – mark 5, 375oF.
2. Grease two 7-inch sandwich tins.
3. Cream together the butter and sugar until light and fluffy. Beat in the eggs and a little of the flour, then the milk.
4. Combine remaining flour, salt and 4oz grated cheese, then fold carefully into the creamed mixture.
5. Divide mixture between the prepared tins and smooth the tops level.
6. Bake for 20-25 minutes. Sprinkle with remaining grated cheese, then cool.
7. Cut into wedges then decorate with ginger, walnut halves and pineapple pieces. Serve.

First up, confession time, turns out I didn’t have the tin of pineapple I thought I had, so I just used more walnuts and ginger. Nor did I have 7-inch sandwich tins, the smallest I had were 8 inches, but when has size ever mattered, eh?

I decided to grease and flour the sandwich tins for ease of unsticking, but otherwise I followed the recipe to the letter. I used mature Scottish cheddar from Lidl, because that’s what I had, and the recipe didn’t specify. The final mixture was really quite thick and it took a lot of effort to get it remotely smooth in the tins – after trying a couple of options, I would recommend a plastic spatula for this. I popped them in the oven and checked them after about 18 minutes. They were very much done (they were a little browner around the edges than I had intended) and would have probably benefited from being checked earlier or using a slightly cooler oven. This might have been because of the 8-inch tin debacle or possibly because my oven is more efficient than its 1970s counterpart. I sprinkled over the remaining cheese and let them cool partially before flipping them out onto a rack.

When they were completely cool, I cut them into eighths and tried to adorn them as instructed. The recipe does not give any indication of how you are supposed to get the decorations to stay put. Although the ginger stem sort of stuck due to the syrup, the walnuts were not having any of it. After shouting at them for a bit (probably upsetting my neighbour’s cats in the process), I gave up and balanced them artistically. Because historic recipes are art, dammit.

These weren’t precisely bad, nor were they good. The flavour was fine, if a little odd (exactly the cheesy-sweet combination you’d imagine), but what really let them down was that they were so greasy. The walnuts were okay with them, but the sickly stem ginger made them even stranger. Weirdly though, they were also quite moreish and I absent-mindedly ate several before realising what I was doing.

Suggested alterations: Less fat? Or, you know, make something else instead.

Final verdict: These are definitely not cheesecake. They are wedge-shaped though, so I suppose the Cheese Information Service was 50% correct.