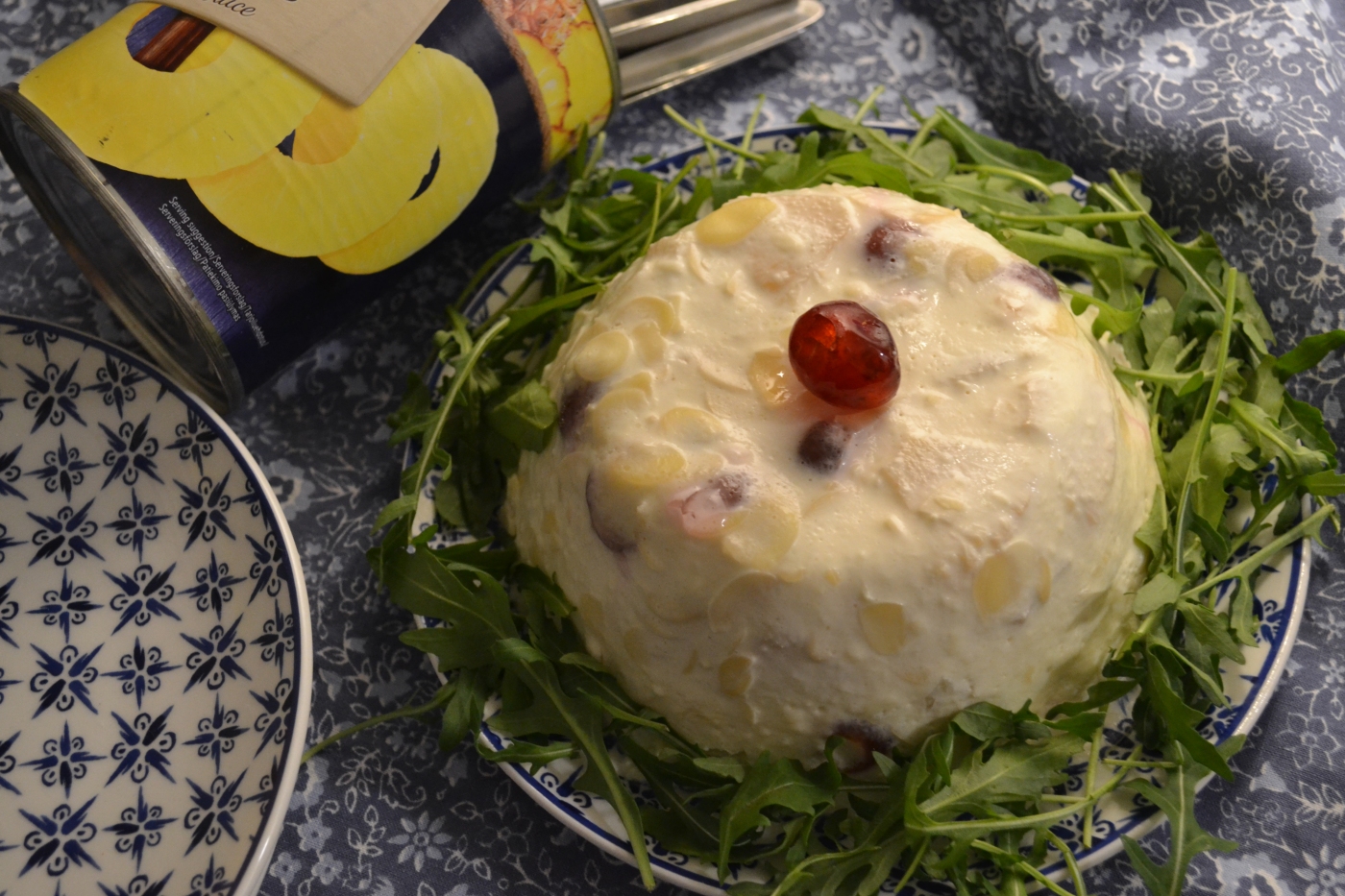 I bought this little book a couple of weeks ago on a trip to Aberdour. It came from one of the strangest vintage shops I’ve ever been in and mostly I bought it because it was by ‘Aunt Kate’, also it cost 50p. It’s one of those freebies that you get with magazines and this one apparently came as part of the People’s Journal. Flicking through it on the train on the way home, I came across this recipe and it was simultaneously so horrifying and so intriguing that I had to try it.

I’ve talked about the historical fad for gelatine before, so I will spare you the details again. Let’s just dive in to the stuff of nightmares then –

Heat 1 cupful of juice, ½ each of pineapple and cherry. Stir the gelatine into ½ cupful of cold mixed juice, add the boiling juice, and set aside to cool. Cut up the fruit and nuts and, when the juice is cool, pour over the two mixed. Set aside until the jelly begins to set, then stir in the mayonnaise and lastly the whipped cream, and turn into a mould to firm. Serve on lettuce leaves.

I couldn’t find tinned cherries anywhere so had to resort to glace cherries, which I washed the syrup off. This meant that I could only use pineapple juice for the jelly. I also used ready chopped almonds as I had no desire to blanch and chop my own. For the sake of not wasting that much mayonnaise (I like mayonnaise and I’m not sure it should be treated in such a haphazard fashion) I made a third of the recipe. Otherwise the instructions were pretty easy to follow. The resulting white foamy mess looked so revolting that I actually left it in the fridge for an extra day as I steeled myself to turn it out and try it.

As you can see, turned out, it still looked deeply unappetizing and maybe like it was going to suddenly grow and take over the world. I served it on a bed of rocket as that was what was in my fridge, but I imagine it would have probably been iceberg in the 1930s. The texture was the first thing you noticed, sort of like crumbly jelly, not the over-gelatinised stuff of the 1950s but a softer, more flaky consistency. It’s really hard to describe, sorry. The taste was honestly not as bad as I expected. I mean, it wasn’t good, but both tangy and sweet with the slightly weird crunchy bits of almonds.

Suggested alterations: miss out the mayonnaise and cream and just make a nice fruit jelly?