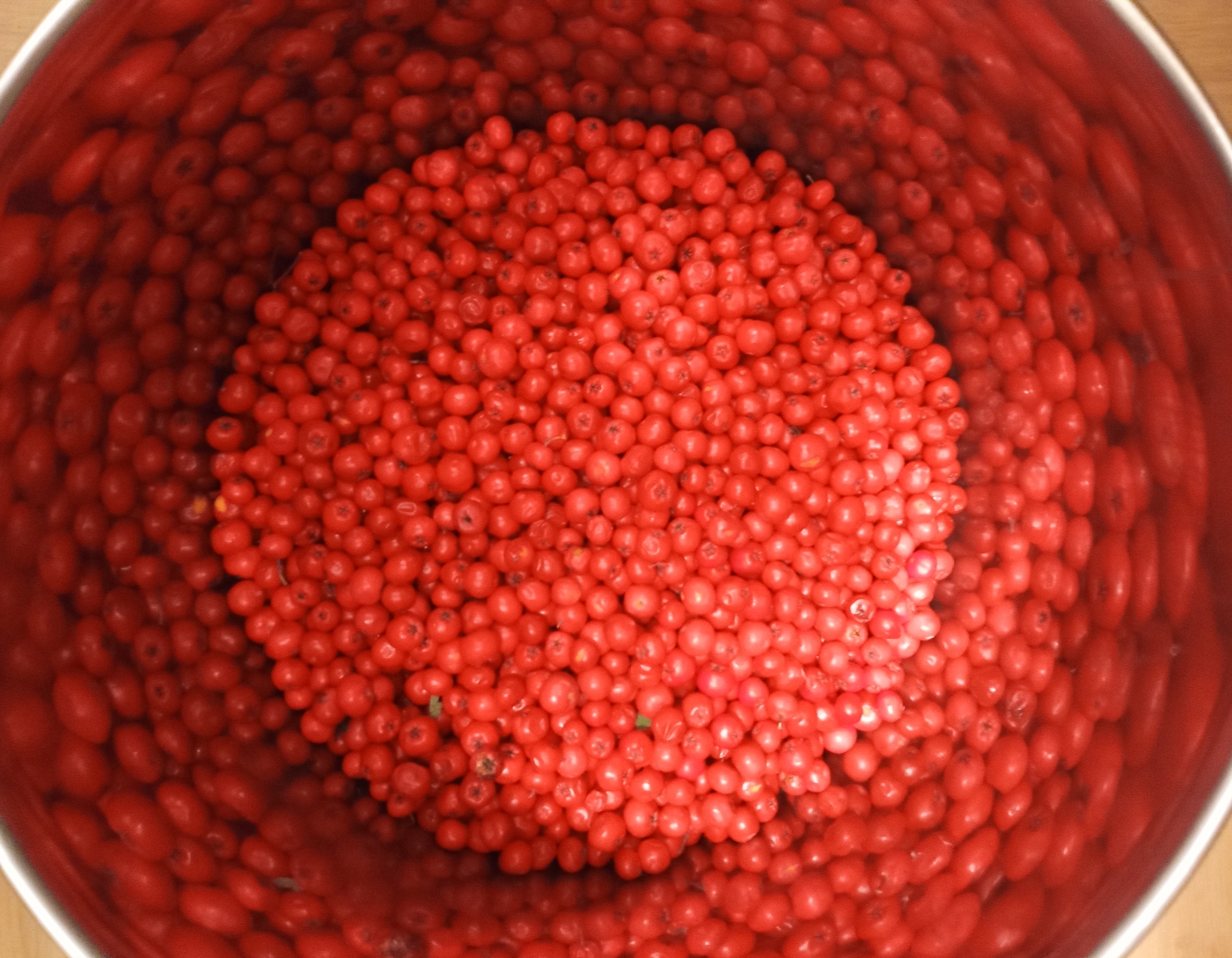 I managed to reclaim my wine-making kit from my parents’ house last weekend, having not had it for over a year. This obviously means that I’m keen to bring on the wine-making. The rather battered paperback that this recipe comes from belonged to my grandfather (as did my hydrometer and demijohns) and it has seen me through a range of strange experiments in alcohol manufacture.

Rowan trees are everywhere in Edinburgh so I thought I would put some of their fruit to good use with this recipe.

Gather berries when they are ripe and dry, remove stalks and place the fruit in a bowl. Just cover with boiling water, crushing the fruit with a wooden spoon, and leave for four days. Strain and to each gallon of liquid add 3lb. of sugar and 1oz of bruised root ginger (tied in a muslin bag). Stir until sugar is dissolved and then add the yeast. Remove the ginger after ten to fourteen days of fermentation and fit an airlock. When the fermentation is over i.e. gas bubbles are no longer formed, syphon the partially clarified liquid with a rubber tube into a clean jar, taking care not to disturb the yeast deposit. Make sure the second jar is completely full when the cork in inserted, wax the top of the cork and store in a cold dark cellar for six months. Longer storage improves the wine.

As wine takes rather longer than your usual recipe, I will report back on progress with a second post, but I have successfully achieved the first few stages of the recipe. I collected an awful lot of Rowan berries from my local park (getting some strange looks in the process) and they have been sitting in my kitchen in water for the best part of a week. I found a wooden spoon ineffective for crushing them, so I used a potato masher instead. I strained the liquid this evening, and it was very thick – I thinned it with a little hot water to make it up to a gallon and added the sugar (in this case, granulated), yeast (I used Wilkos wine yeast, which I have found to be good in the past) and ginger. It is now frothing away merrily and when it has calmed down a little over the next week or two, I will transfer it to a demijohn and add the airlock.