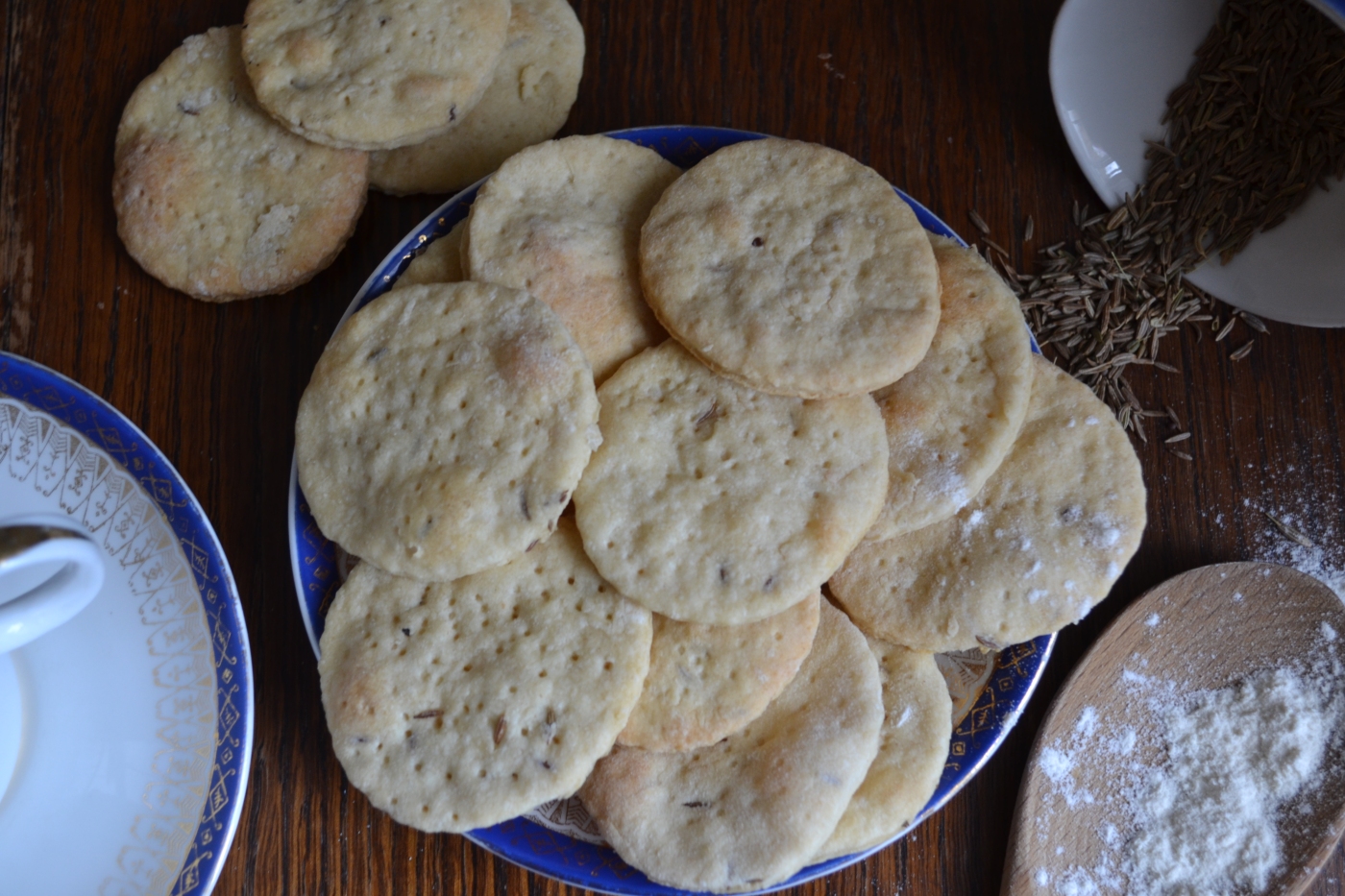 Although this little book was published in 1995, it comprises of extracts from a privately-owned household book from the eighteenth century, containing both recipes and various cures for ailments. Interestingly, it is written in four different hands, suggesting it was passed down between family members and added to over the years. This obviously makes dating the recipes precisely quite tricky, hence the rather vague attribution today.

I’m, once again, on the hunt for seventeenth and eighteenth century recipes for work, and this one jumped out as something I already owned all the ingredients for, which is unusual in these sort of books.

Recipe:
Three pounds of fine flour well dried, a quarter pound of good butter well rubbed into the flour, a quarter of a pound of fine sugar, one ounce of caraway seeds. Wet it with new milk, mix it well together and roll it out as thin as possible. You can cut them out with any round thing and prick them all over as much as you can or else they will blister. Bake them on tin plates in a coolish oven.

I quartered the recipe (and it still made a vast number of biscuits). This gave quantities roughly as follows:
12 oz flour
1 oz butter
1 oz sugar
1½ tsp caraway seeds
milk

I rubbed the butter into the flour as though I was making crumble and stirred everything else in to make quite a stiff dough. I managed to get this rolled out pretty thinly, I used a round cutter and pricked the biscuits randomly with a fork. I Initially baked them at 160°C, but then turned the oven up to 170°C, which seemed to work better.

Caraway was a popular flavouring in the sixteenth through eighteenth centuries (it is said that Mary Queen of Scots was partial to caraway flavoured shortbread). It was also believed to have medicinal properties. Here’s a quote from Culpeper’s Complete Herbal (1653) on the subject:

Carraway-seed has a moderate sharp quality, whereby it expels wind, and provokes urine…and is pleasant and comfortable to the stomach, helping digestion: the seed is a remedy for all the cold griefs of the head and stomach, the bowels or womb, as also the wind in them, and helps to sharpen the eye-sight.

In the eighteenth and nineteenth centuries there was a fad for biscuits to aid digestion, one of the earliest of which is the Bath Oliver (invented c.1750), which is still widely sold today. Later biscuits of the same ilk include the Digestive (invented 1839) and the American Graham Cracker (invented c.1880s). This recipe is very similar to what is now known as an Abernethy Biscuit (but without the baking powder) and it probably represents a step in the development of these type of snacks.

This recipe doesn’t really seem to know what it is in terms of sweet or savoury – there is not enough sugar to make them a traditional biscuit, but enough that they taste weird with savoury accompaniments.

Suggested alterations: Without the sugar, these would make an interesting biscuit for cheese

Final verdict: Caraway is a fun flavouring and one I’ll definitely return to. I’m not convinced, however, that these had any positive impact on digestion.